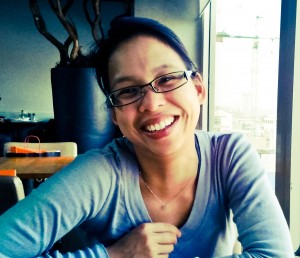 I could say that I grew up between two cultures: one is the Dutch culture of the outside world, including behaviors of my friends, and the way they viewed things in the greater world. The other is the inner culture of my family, which is not equal to the Indonesian culture, but has a lot of overlap. In my opinion, my parents are pretty Dutch in most respects. It’s our family culture that’s unique, and very different from the Dutch culture.

I must have been 8 years old when my neighbor introduced me to peanut butter as a topping on bread (something as common as cows in a meadow in the Netherlands, or status updates on Facebook where ever in the world). I thought it absolutely normal that my grandmother lived in our house. Also, it never occurred to me that you could disobey your parents. I simply did not want to.

It’s hard to tell how many of these quirks are ‘family culture’ and how many are ‘Indonesian’. This made me think. How can anyone ever tell which influence comes from where? Most probably, every family has its own family culture… so how is my situation different from anybody else’s? Maybe I had just been living in the ‘extremes’ of the spectrum.

I always thought that the greatest blessing I received from growing up with two cultures is, that it’s taught me from a very early age that things in other cultures or situations are just different. There is never a right and wrong. It’s always just different. Because who are we to judge that not eating everything on your plate is impolite? (In the Indonesian culture it means you haven’t had enough) Or, for that matter, that not shaking somebody’s hand (I’m purposefully not stating the gender of that person) is impolite? It’s just different. No value can replace that insight. I learned a lot from it and it has saved me from numerous occasions of being judgmental (something I try really hard not to do) .

On the other hand, it taught me that there was so much about another culture that I don’t know about. The Indonesian one in particular. Contrary to my sister’s urges, I was afraid of the unknown. Knowing how much I didn’t know made me worry about all the things I could do wrong when in Indonesia. Sometimes ignorance really is bliss. I think any tourist would be more apprehensive if they’d know that you’re not supposed to be in a photograph with 3 people, that you’re not supposed to accept the plate given to you so you can grab dinner, but that you’re supposed to offer it to the eldest in the family, or that you’re not allowed to give away a gift, even if it’s a t-shirt that is 5 times your size and would fit your cousin much better. (Mind you, some of these examples may be family culture and not Indonesian culture.)

Even though some of these examples have beautiful cultural value, they made me uncomfortable, because I didn’t understand them and often got them wrong.

Maybe it’s age, I don’t know. But I grew over it. I visited my family in Indonesia and it felt like returning home in a way. All these familiar things that had long been forgotten merged together with my ignorance of the culture to create an experience that is mostly captured in the words ‘family visit’ as it is supposed to be. And I’m grateful for that.

So for all you people who might feel the same, I encourage you to embrace your other culture and let it be a part of yourself. Because no matter whether it’s family culture or something else, no matter how different it is, you grew up with it and so it is part of you.